THIS ALL WOMEN’S SKI AND SNOWBOARD COMPANY IS GAINING TRACTION

This article was originally published in March 6th, 2017 and written by Addie Drinkwater

"Ripping around the resort is never a bad day but gathering my ladies and hitting the backcountry will always be my favorite activity." Photo Courtesy Coalition Snow.

Not too long ago, a notification popped on Facebook inviting me to a group called "Wyadho: Sisterhood of Shred." Like the Pantsuit Nation of the local outdoor community, the group was full of rad women interested in getting together to ski and ride in the area.

The group was created by Coalition Snow, an all women's ski and snowboard company based out of Tahoe. The more I learned about Coalition, the more I've become excited to share the story of this company.

Jen Gurecki founded Coalition Snow alongside a team of other Lake Tahoe ladies who knew they couldn't waste any more time waiting for other companies to start making high performance, women-specific gear. They founded Coalition with the idea that nothing is more powerful than when bright, motivated, and badass women come together to build each other up. 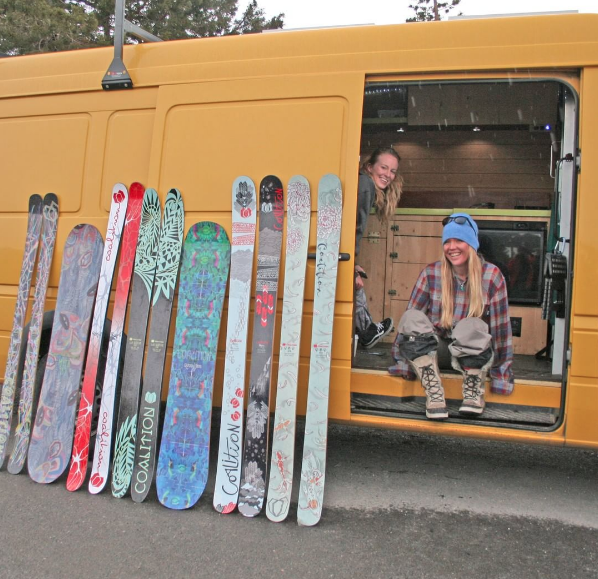 Touring around ski resorts in the "bumblebeast" with the new line up of gear from Coalition Snow. Photo Courtesy of Ashley Hutchinson.

AD: How did you come up with the idea to have an all women's ski and snowboard company?

JG: We started Coalition Snow over bourbon and backcountry skiing, with the right mix of bold risk-taking and naiveté. As women who have been living in mountain communities for decades, dedicating our lives to chasing powder days, we recognized that women have never had the same range of options available to them as men. There are obvious outliers, but for the most part women’s skis and snowboards are watered down versions of men’s. They serve the beginner market quite well, but the rest of us are left with few choices.

Basically, women’s equipment sucks, and we deserve better. Not only has the “shrink it and pink it” paradigm sandbagged women athletically, it’s relegated women to the sidelines. Launching this company has always been about more than just creating exceptional equipment for women; it’s been about amplifying women’s voices and crafting a new narrative for women in the industry. 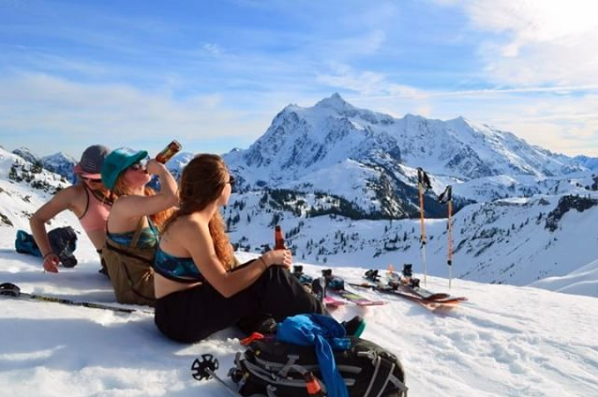 "I attended a ski film festival on the east coast and happened to stay with a girl that I had never met, and after three days she invited me to move across the country to live with her and four other girls in Washington. I thought, 'why not??' and in turn found a rad group of ladies that all genuinely loved skiing, pushing each other's boundaries and drinking fine brews in the backcountry." Photo Courtesy of Sarah Redman.

AD: What are you doing to progress technology for women skiing and riding?

JG: We’re just making really good women’s equipment rather than this watered down shit we’ve been presented with for decades. We’re able to do that because we listen to women and design for their preferences. There’s no gap between us and the women we design for. It’s that simple. And everything that isn’t that simple is a secret.

The 2017/18 season will be our fourth season building boards. We chose to outsource from the beginning because we wanted consistency in our product and the ability to quickly scale our production. We work with a few exceptional factories who have been building for decades. In terms of the design, we integrate our own preferences with the feedback that we receive from our community—the ambassadors, athletes, customers, and random humans we meet on the chairlift. We take all of this feedback, pair it with shit tons of research, and create the profile of our equipment. From there, we have prototypes built and we test it out to make sure that it meets the cut. 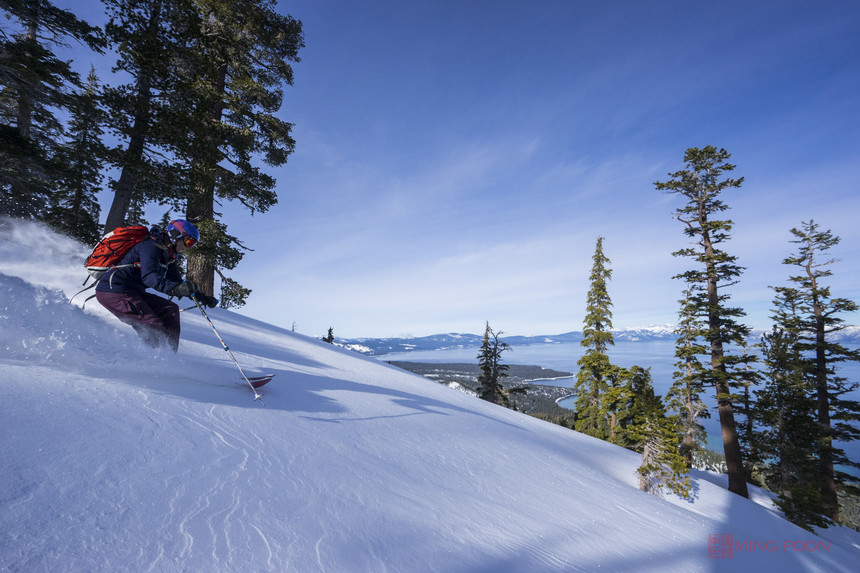 AD: What are your goals for the future?

JG: Our mission is to radically deconstruct the status quo in the snow sports industry. Our goal is world domination. We believe we have a good shot at achieving both because we put women at the forefront of design and our company, investing 100 percent of our resources and energy into building the most kick-ass women’s equipment and being an outspoken voice for them in the industry.

AD: Do you face any challenges being an all women’s company?

JG: No, it’s been really easy because strong women who challenge the status quo and push against the patriarchy are always very well received (note the sarcasm, in case it isn’t painfully obvious). But seriously, yes, there are a ton of challenges. We see it everywhere, from raising investor capital to people questioning our business acumen. We are not looking for any sympathy or hand-outs, but our experiences as business women mirror the extensive data about how women face different challenges than men do. And while this is changing, and there are men and women alike chipping away at this bullshit, it’s a reality for any woman in business, particularly in male-dominated industries. 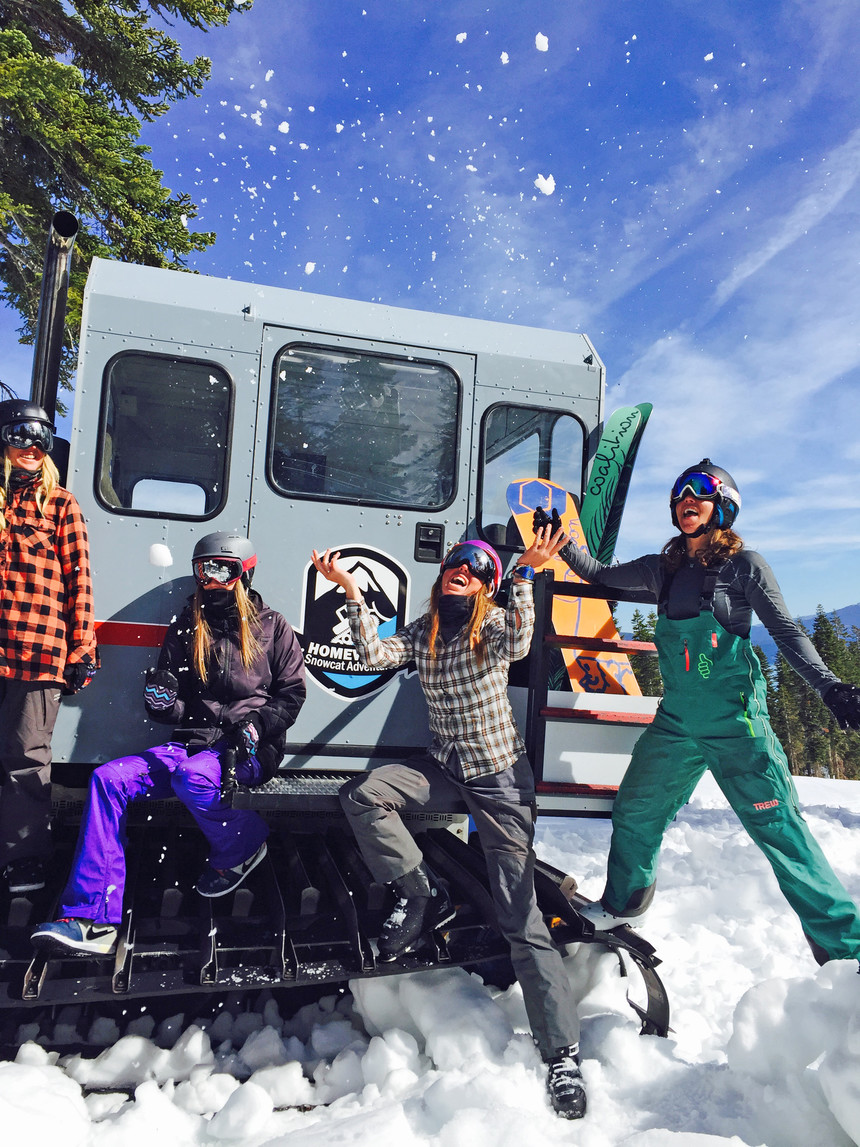 Ladies practicing backcountry safety while cat skiing in Tahoe. Make sure you always have each other's back in the backcountry. Photo courtesy of Coalition Snow.

AD: Is the market big enough to only supply to women?

JG: Women represent nearly half of all snow sports participants (the last data point I read from the Snowsports Industry of American Intelligence Report was that women make up 41 percent of skiers and 38 percent of snowboarders.) Women also drive nearly 80 percent of consumer purchases. So this idea that the market is so small is outdated, particularly when you look at the growth in the women’s market. Whether or not this market is big enough to sustain a company likes ours, only time will tell. But our traction thus far would have us believe that we can make a serious go in this industry.

Look out for a  Kickstarter that will be launched on March 8, International Women's Day, that will fund the expansion of Coalition Snow's ski and snowboard line to youth girls so younger generations of female shredders can pursue their passions and find their footing on the slopes.